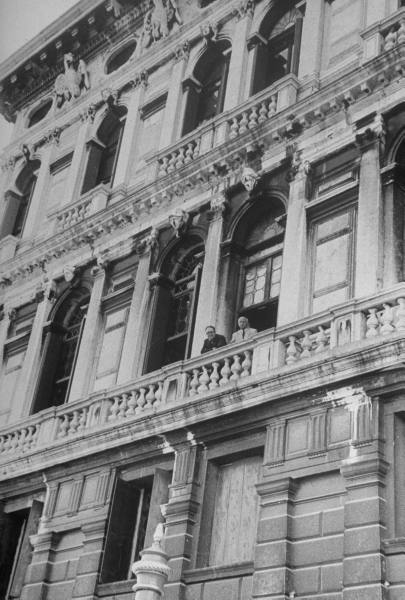 Charles de Beistegui at the Balcony of Palazzo Labia


It was in the late summer of 1951 that Charles de Beistegui gave is famous costume ball.
The Beistegui Ball, that stands in social history as one of the - if not the - most famous balls of the 20th century, took place in Charlie's spectacular Palazzo Labia in Venice. 1000 guests were invited and the ball was attended by artists, aristocrats and millionaires from the entire world.

It was the first grand party after the privations of World War II and, therefore, the first opportunity to astound. Invitations went out six months before for people to have time to get ready, have the costumes made and travel to Venice. Travelling to Venice in 1951 could be an adventure as boat and train could took five days.

The ball was a lavish party and newspapers were full of it. All over Europe the expectant guests were worrying over their costumes and preparing for the great night. The guests elaborated majestic entrances to the ball that were rehearsed for days before.

The story goes that an extraordinary line of chauffeur-driven Rolls Royces was seen in procession through Passo del Sempione in Switzerland in  direction to Venice with large Dior boxes containing the costumes strapped onto their roofs - "a human chain of Reboux hatboxes", as one of the guests put it. The huge Fiat Garage on the outskirts of Venice, which housed 4.000 cars, was completely booked.

On the day of the ball, Beistegui retreated to a suite at the Grand Hotel, a room that purposefully did not have a telephone, in order to avoid frenetic scenes.  At the same time some people harassed  his staff claiming that, for some reason, their invitations had not arrived.

Couturiers were to the fore, as were the chic hairdressers (such as Alexandre de Paris) who had a field day, though not one without pressure, racing from hotel to hotel with gold lacquer and white powder. Venice was like a giant house-party.

Interestingly, the Mayor of Venice at that time was a Communist, and the Venetian people were notoriously impoverished after the grim years of the war. It might have been considered inappropriate to put on such a display but the Mayor was delighted, as were the Venetians. The ball took place the day after the annual Regatta, and the Mayor loaned two elaborate barges to Beistegui for his special guests. The city received welcome publicity, and with some of the richest people in the world descending on the place by yacht and by train, there were plenty of advantages for hotels, restaurants and other establishments.

At the moment of the party itself every bridge and all the streets by the canal were packed with onlookers. There was clapping and great excitement. Atmosphere was electric long before people reached the ball. Food and drink was provided for the crowd. There were jugglers, puppets, fireworks, even greasy poles for them to climb. And there were guests who came out to join in the fun, removing their masks to the delight of the crowd.

Arturo Lopez Willshaw, the great collector and party giver who had always loved China and Chinese artifacts, and his wife, Patricia, dressed as the Emperor and Empress of China made an apotheotic entrance. Arturo's lover, Baron Alexis de Redé, who was part of their group remember " I was an attendant in their suite, with a fantastic Chinese crown, staff and sword, looking, I confess, rather like the last boy emperor. Our costumes were exact copies of those in the famous tapestries, the Voyage of the Emperor of China". Their arrival in a great Chinese junk purposely built was said the most spectacular of the evening.

Couturier Jacques Fath and his wife, dressed as the Sun King, had to remain standing in his gondola because “his posture [was] dictated by a costume so perfectly fitted and heavy with embroidery that he could not sit,” stated Prince Jean-Louis de Faucigny-Lucinge in his book Legendary Parties.

Lady Diana Cooper, dressed as Cleopatra by Cecil Beaton and Oliver Messel, made a entrée that "people thought was the loveliest sight with the light from the windows of the palazzo falling on her face and pearls and blonde wig"

Daisy Fellowes came as the Queen of Africa. She was not feeling well that night and so she laid down on a bed before making her entrance. When it was her turn to parade, she rose from the bed and turned into a queen. "She was by far the most elegant person at that ball. I have never seen anyone walk as beautifully as she did. She had in-born style." Alexis de Redé said.

Seventy footmen in costumes from the Duchess of Richmond's ball the night before Waterloo, attended the guests. Ballerinas from the Marquis de Cuevas's company performed sarabandes and minuets in the courtyard and receiving his guests at the top of a giant staircase, Beistegui was a conspicuous presence in an 18th-century sausage-curl wig and platform buskins which elevated him two feet above everyone else, so that he could see and be seen on the night that was probably the most important night of his life.

The firemen of Venice performed a fantastic human pyramid, four rows high, in the central room of the palace, a troupe of giants entered and there were two jazz bands.

Apart from these displays and the spectacle of the costumed guests, "the supper was good, and the drink plentiful". Some of the guests did not get home till 6 am. 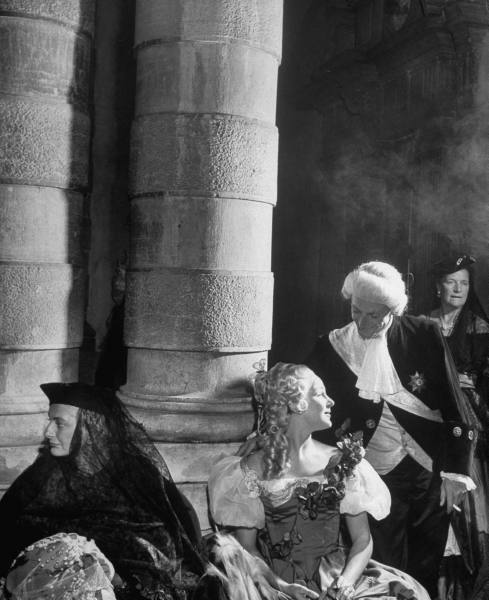 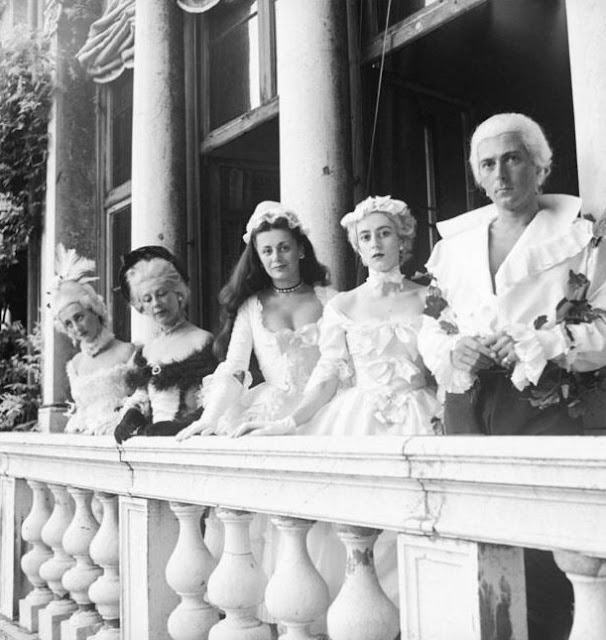 Guests at the Beistegui ball 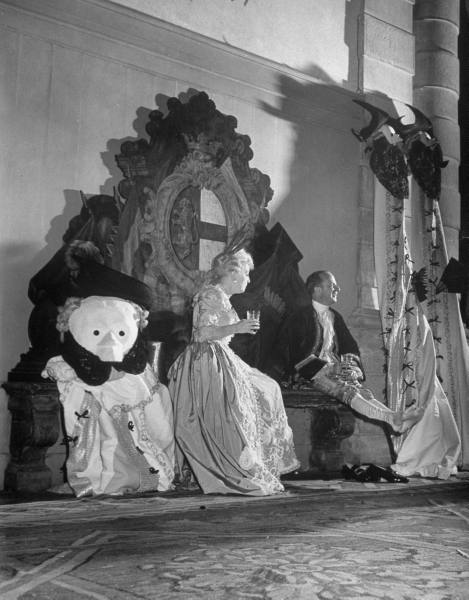 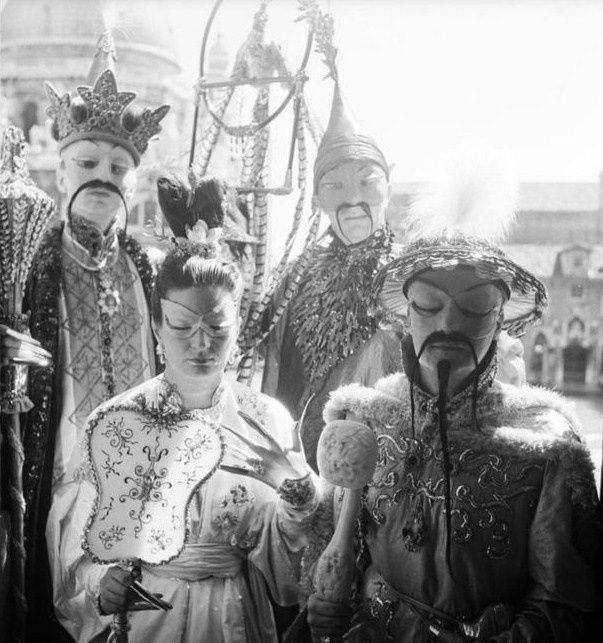 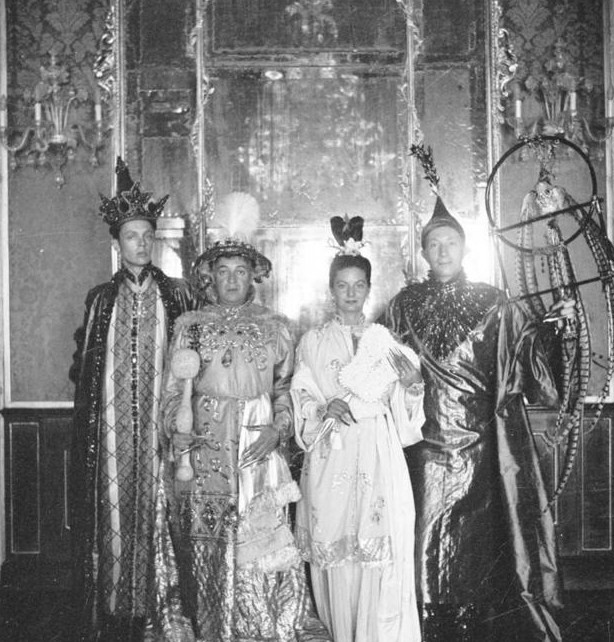 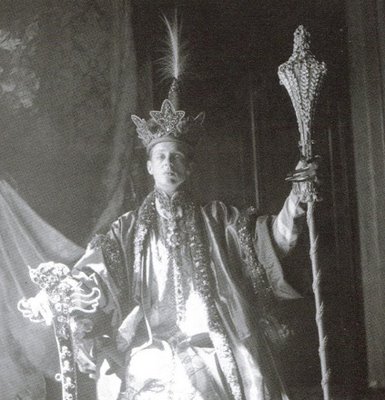 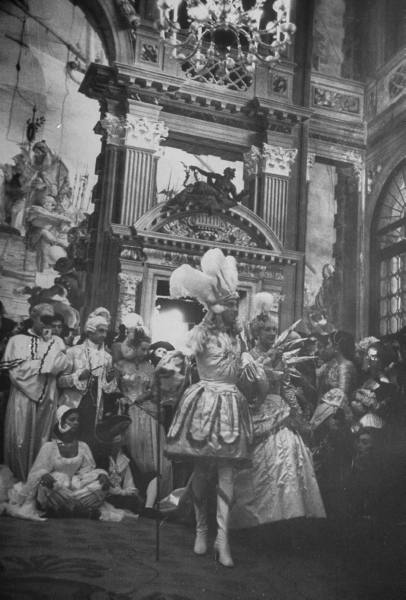 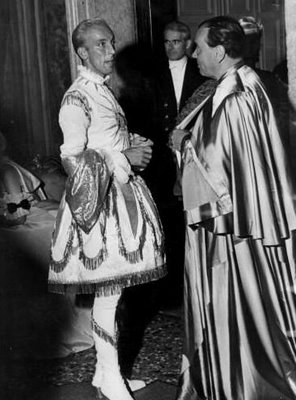 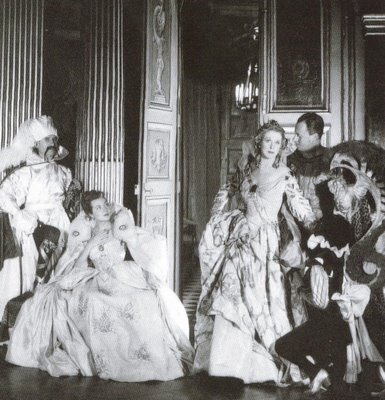 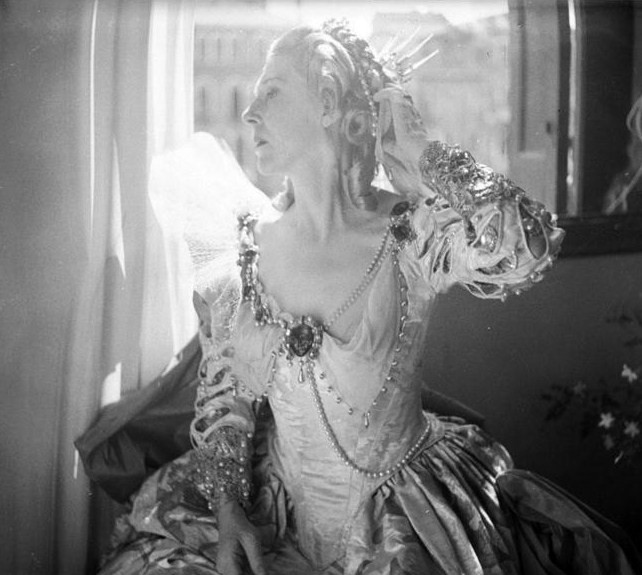 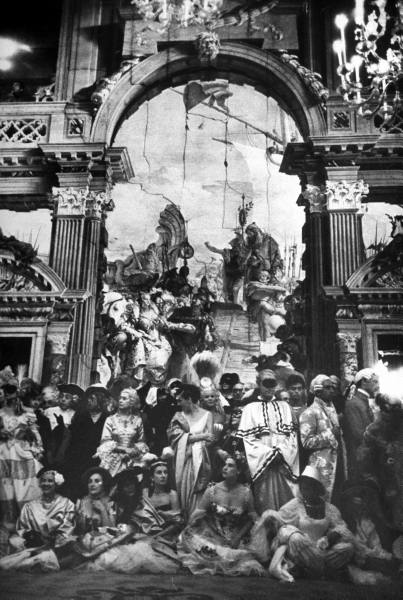 Costumed guests sit in front of the fresco by Tiepolo 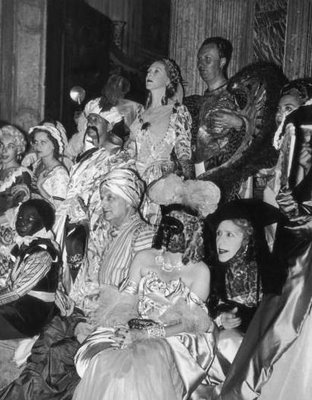 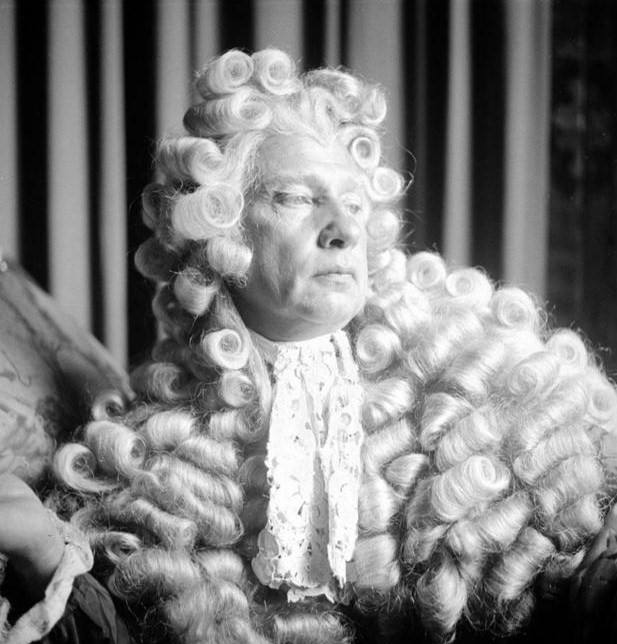 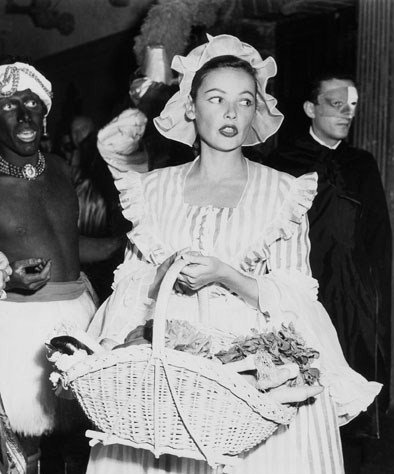 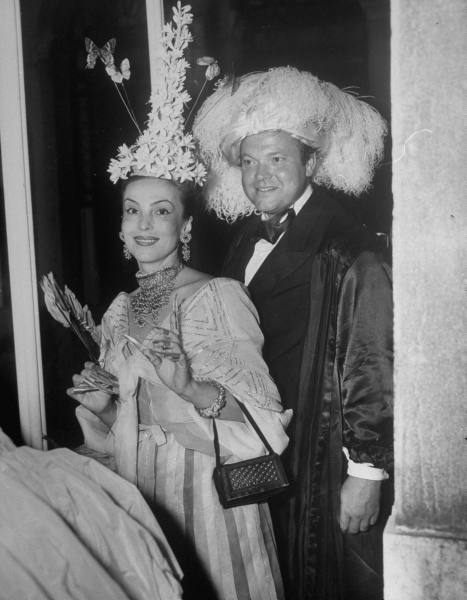 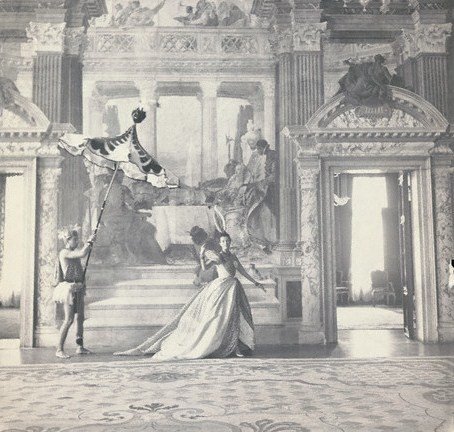 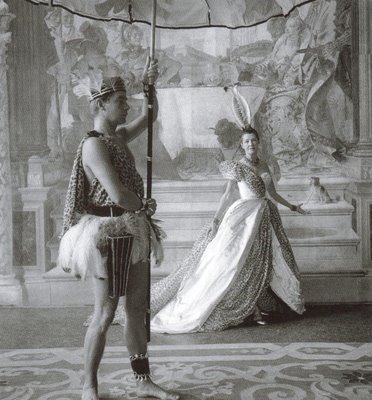 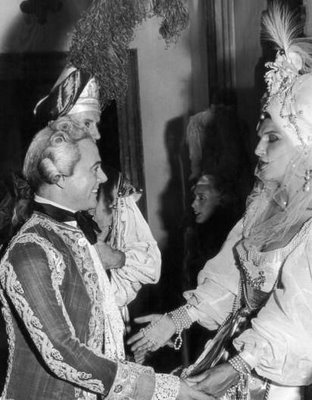 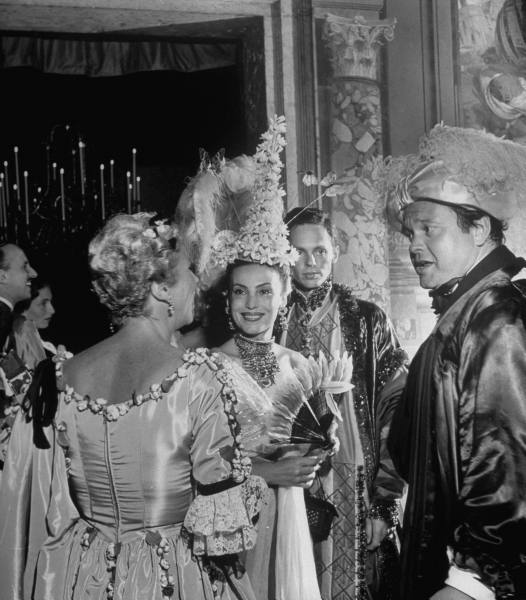 This is an archive of
inspiration for
Scala Regia
paper magazine.
To get a copy
just e-mail:
contact@scalaregiamagazine.com 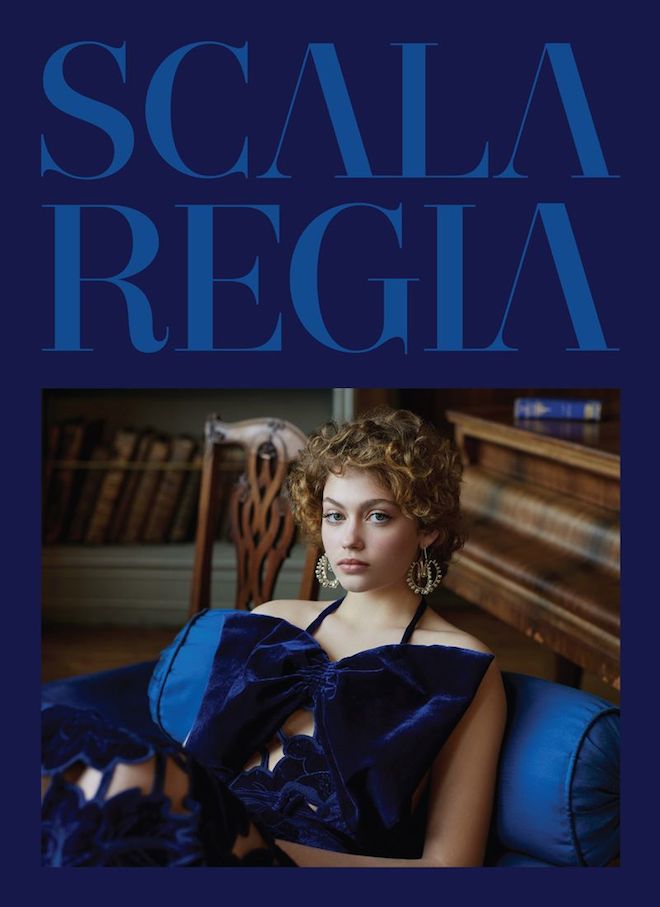 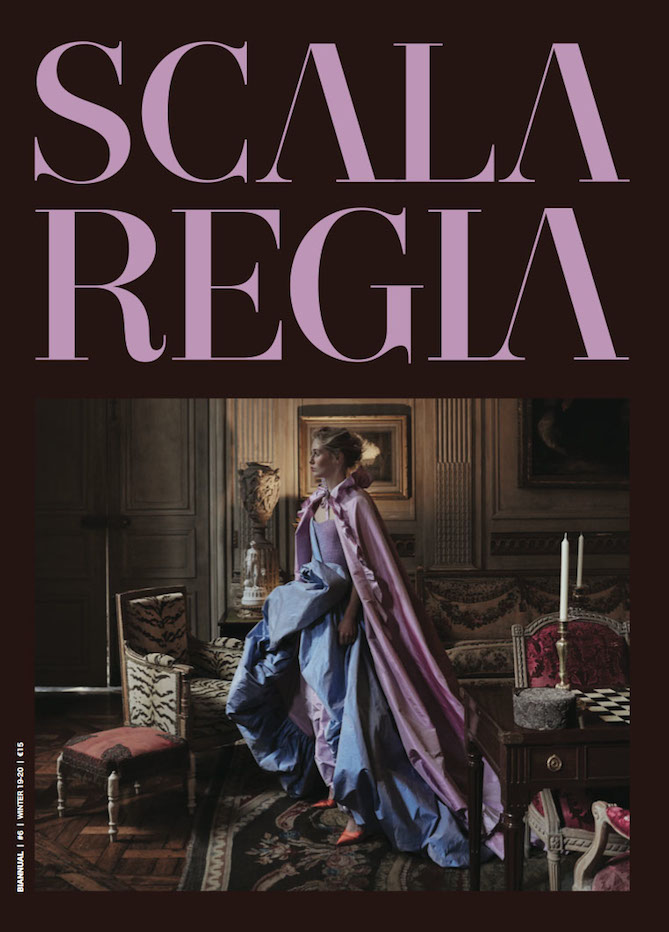 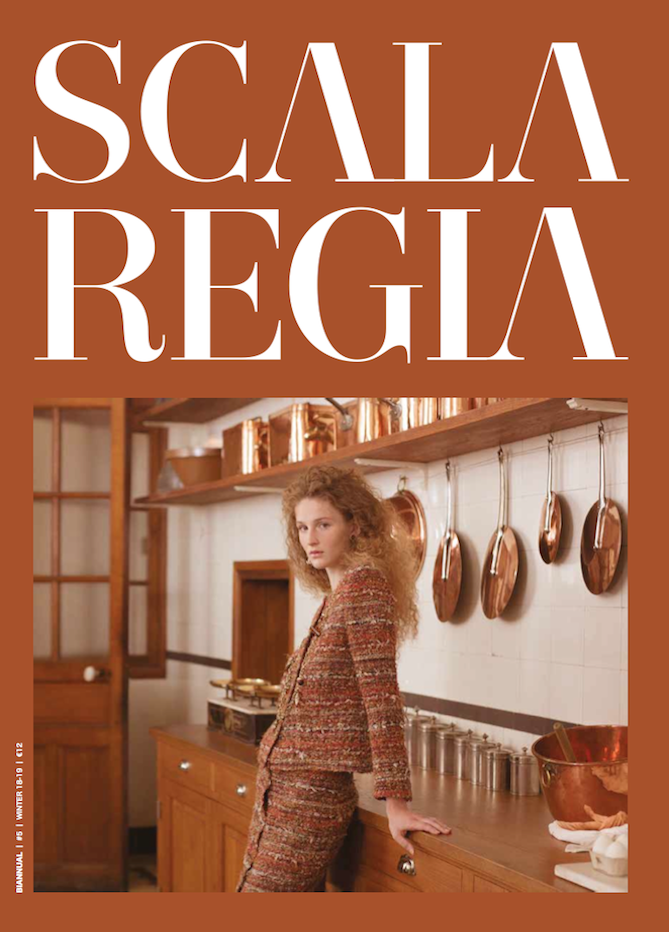 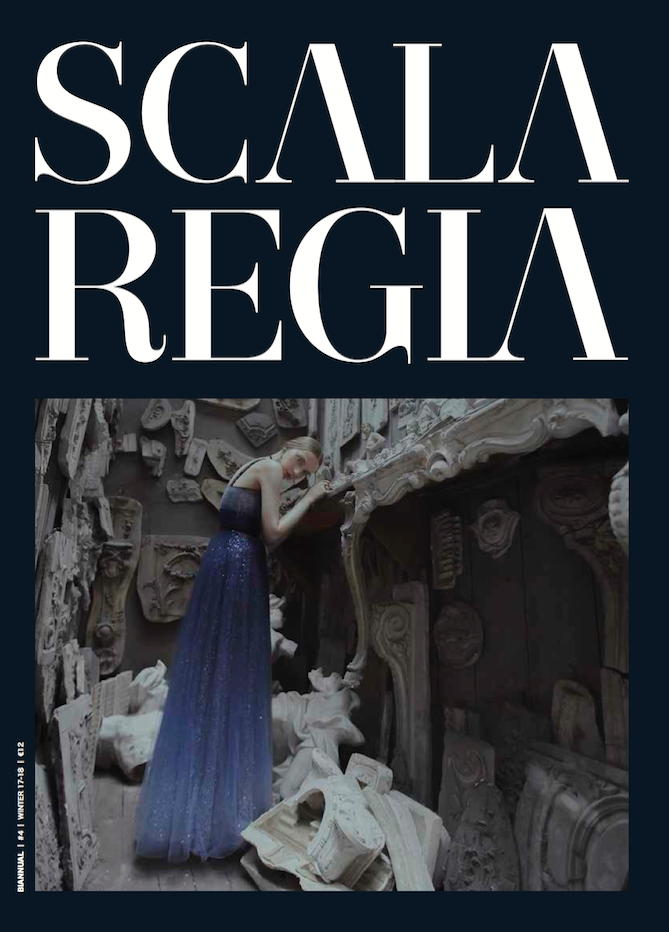 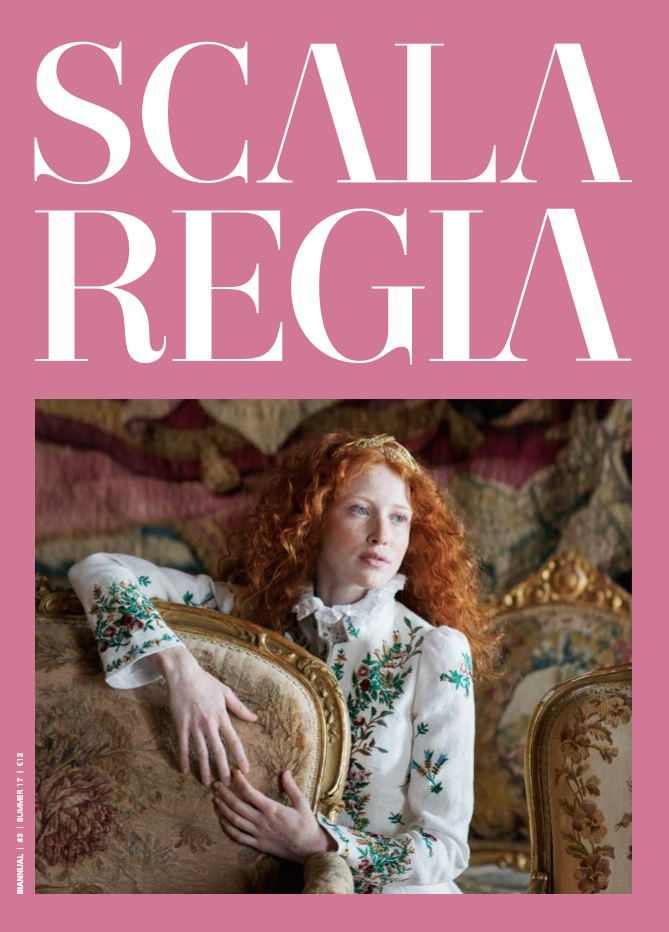 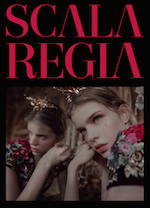 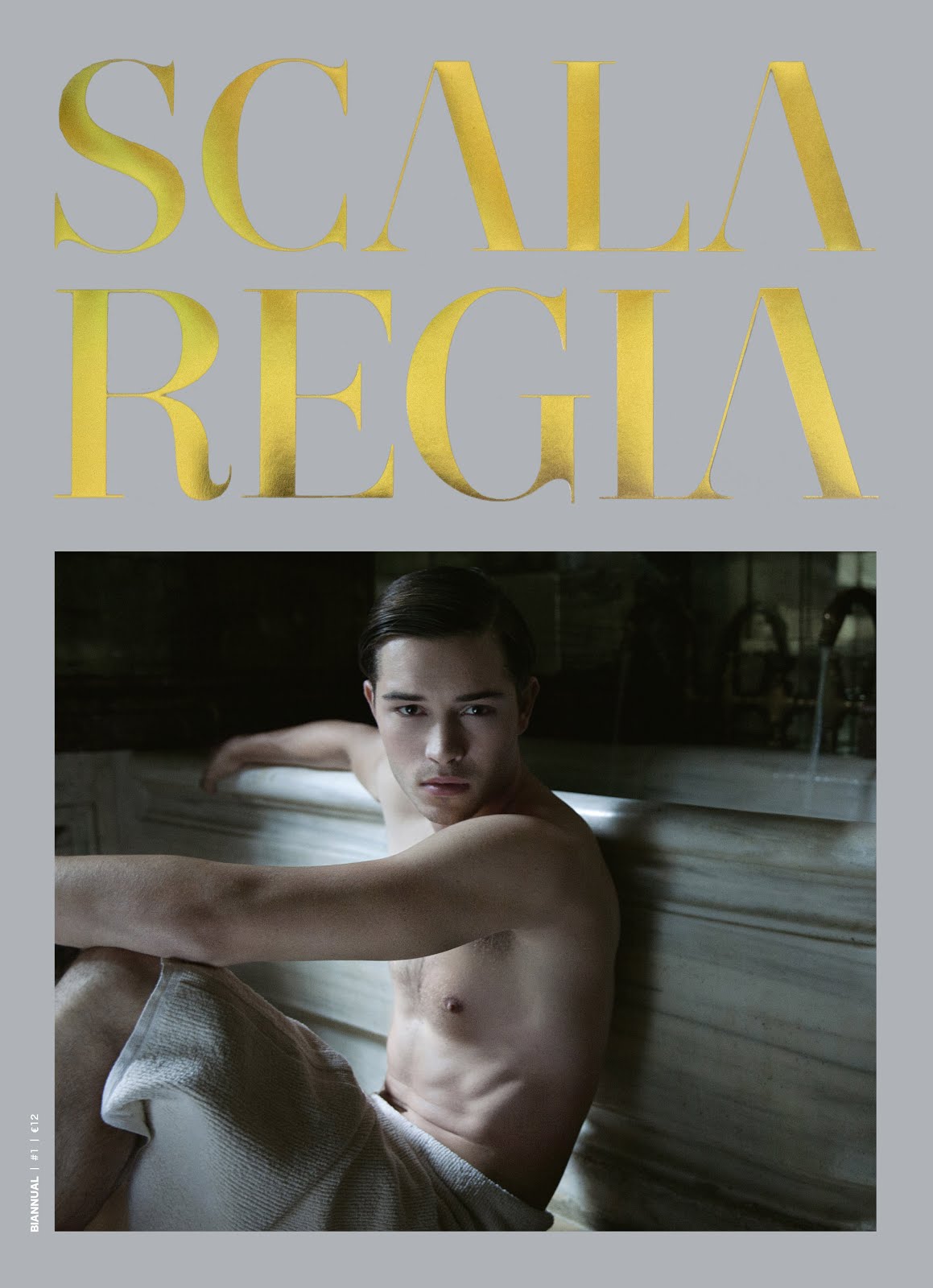 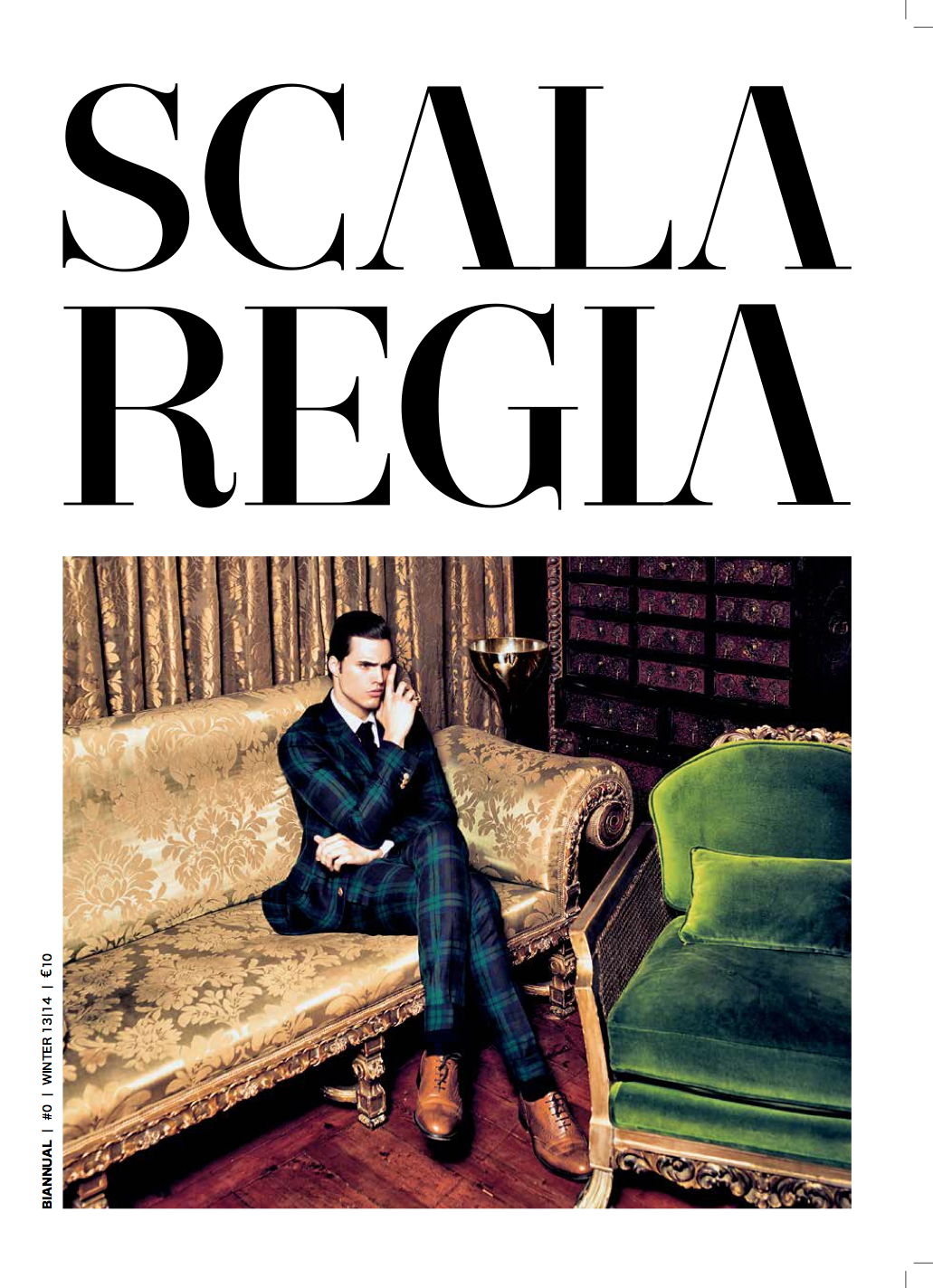 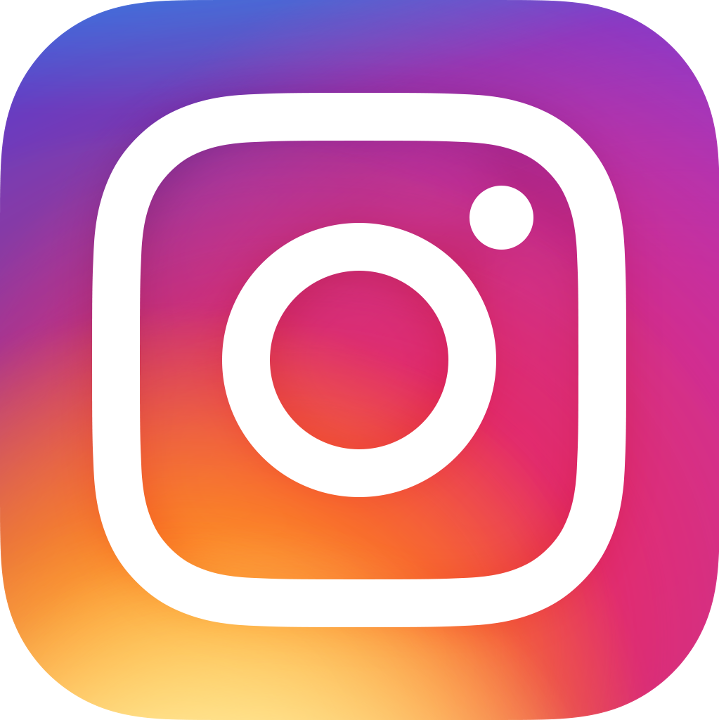 NOTE
Several images present in this blog are public domain.
Scala Regia does not claim any ownership or recognition for them.